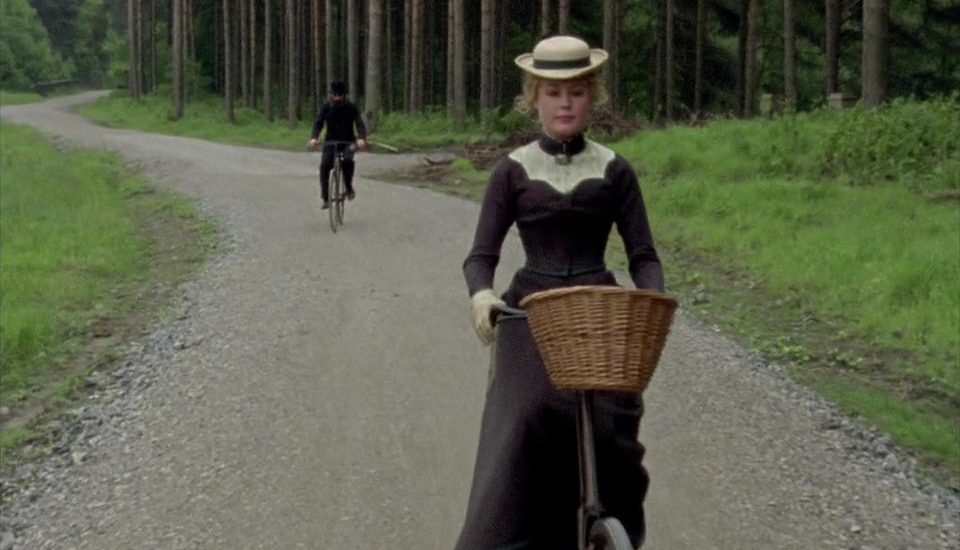 Barbara Wilshere played the role of Violet Smith alongside Jeremy Brett in the episode ‘The Solitary Cyclist’ (1984) of the Granada series. 35 years later, Le Cercle Holmésien de Paris interviewed the actress to talk about her memories of filming.

1/ How did you become involved with the shooting of ‘The Solitary Cyclist’ in 1984?

I was acting in repertory theatre in Wales (Theatr Clwyd), my first job after leaving drama school, and got a call from my agent to tell me that Granada TV were sending a casting director and producer to watch me in the show I was currently doing. It may have been ‘Tartuffe’. They asked to meet me after the show and suggested I may want to audition for a role in the new series of Sherlock Holmes. I was very excited by the prospect but was also heavily committed to the theatre company I was working with.

I was contracted to work with them for another three months or so. I managed to get to London for an initial audition and then was called back to Granada studios in Manchester for another audition. I was told I had got the part a couple of days later. The theatre company let me out of my contract on a play they were transferring to London.

2/ Did you read Sherlock Holmes’ stories before starting shooting?

Yes I did! I bought the complete works and read them all, starting with ‘The solitary cyclist’! 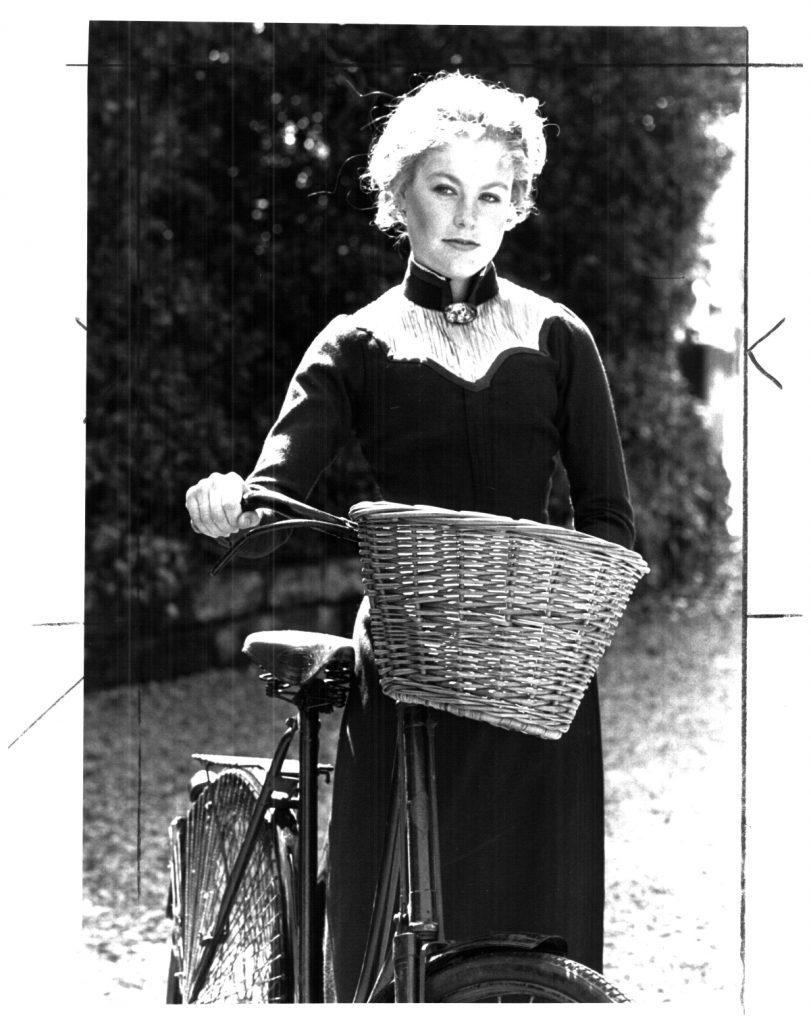 3/ How long was the shooting?

The shooting took place over a month. It was a beautiful summer and we shot in stunning locations mainly in Cheshire. Before beginning shooting we rehearsed for two weeks in London.

4/ Tell us about your shooting experience. What is your overriding memory of working on the film?

It was my first experience of working on film and in television. Everyone was very kind to me, from the producer, to the director, to the cast and crew. Everyone was very excited by the series. There was a real buzz. I think we all knew that it was going to be very special. Granada were investing a lot of money in it and the production values were very high. Jeremy, David and John Castle (who played Carruthers) were very helpful in getting the best out of me. There was a lovely man called Vinnie who worked in props and always had my bicycle ready for me. He was very funny and kind. It was a really happy time.

5/ What memory do you have of Jeremy Brett on set? And of David Burke?

Both Jeremy and David were extremely professional. They had researched their roles minutely. I remember Jeremy studying the illustrations of Sherlock Holmes from The Strand magazine and imitating the poses. It was a fantastic lesson for me in how to approach a role.

They were also very even-tempered. No histrionics! Although Jeremy could be quite dramatic. He was also capable of making fun of himself and was very entertaining on set. He, John Castle and Michael Siberry (Mr Woodley) could be quite ‘naughty’! There was a lot of laughter.

6/ Did you share good moments all together, with all the actors and actresses before or after the shooting?

When we were shooting we often ate together on the dining bus. If Jeremy or David were very tired because of the demands on them, they might have eaten in their own trailers. They were always friendly and sociable with the other actors and lovely with the crew.

When we were filming at the studios, Jeremy and David and John would often ask me to join them for dinner at a nearby restaurant in the evening. And they would insist on paying for my meal! I remember I put on quite a lot of weight while filming! There was always so much food around and location catering was very good! I had to wear a corset in the role and it had to be let out quite bit during the course of the month’s filming!

7/ Did you keep in touch with any of the cast?

I met up with Jeremy on a few occasions but I was aware that he was very busy. ‘The Solitary Cyclist ‘ was the very first of the episodes to be shot although it wasn’t the first to be aired……the third I think. So Jeremy and David had extremely busy schedules.

John Castle became a very close friend and we are still in touch.

I still do a little bit of acting. I’d love to do more but for most actresses, as you get older the work becomes less available, sadly.

I work for a Stroke charity, InterAct. It only uses actors. We go into hospitals and Stroke clubs and read to patients. I run the teams at two London hospitals. It is very rewarding work and I love doing it.

I’m also a keen gardener and help elderly people who used to garden but are no longer are able, to maintain their gardens. 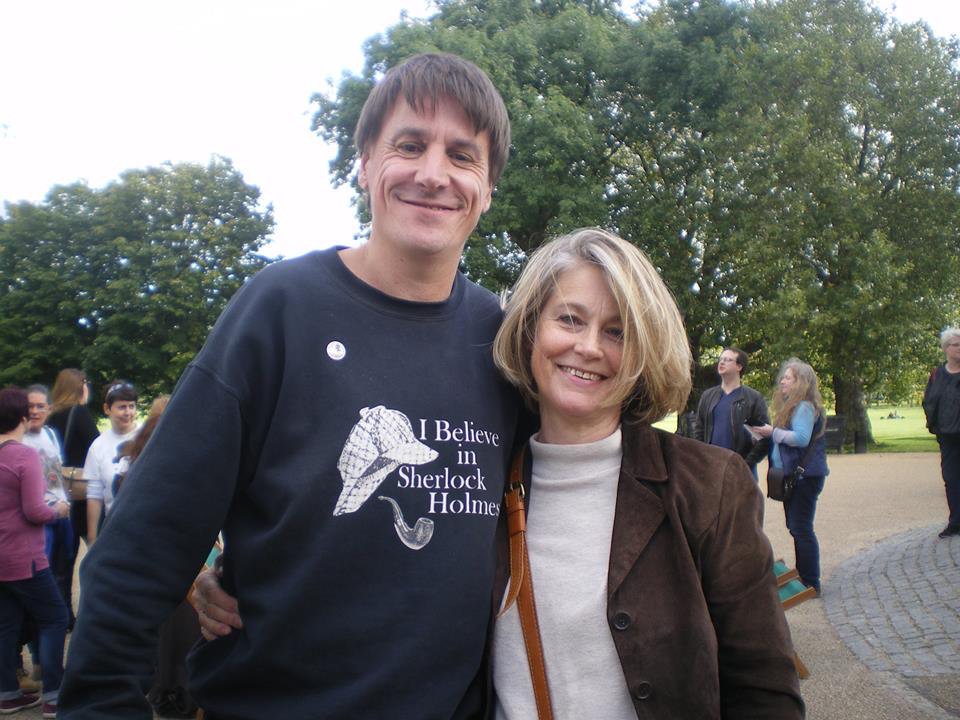 9/ Many famous actors played Sherlock Holmes in film and television. Which one do you think was the best?

Ha! That is impossible for me to answer as I haven’t seen them all! Basil Rathbone was wonderful – but I think outshone by Jeremy!

10/ The Sherlock series with Benedict Cumberbatch has been very successful in recent years. What do you think of the series?

I think the acting is excellent. It is admirable to find a new way of looking at old formats. I very much enjoyed the first series but perhaps found some subsequent series quite convoluted at times. If I was offered a role in it, I would “bite their hands off”!

Post script: Being a ‘new, young’ actress at the time, I was paid a relatively small fee for playing the role! I discovered during filming that the cost of making my wig was more than I was paid for my performance!!

No comments yet
Granada Jeremy Brett